Definitions of hypnosis and suggestion

Hypnosis has often been carved into two separate elements - the hypnotic state (thought by some to be an 'altered state of consciousness', and sometimes called a 'trance' state) and suggestion (e.g. see Heap 1996). This distinction has led to some useful research, and is particularly important when considering the results of neuroimaging research. However, it is important to note that not all researchers agree with this definition (see Barnier 2008). 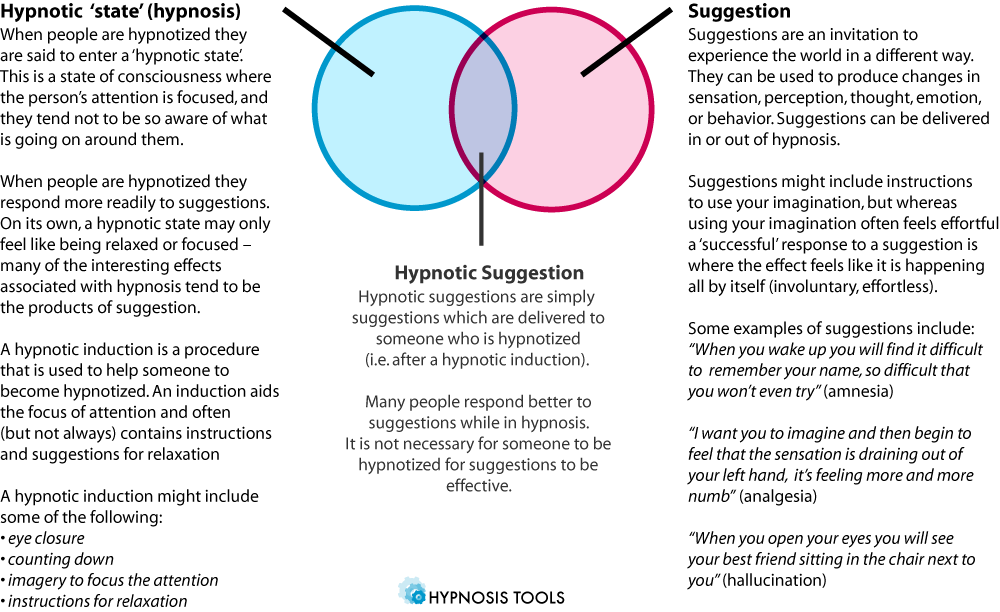 Figure: Separation of the hypnotic state and suggestion can be a useful way of thinking about the effects of hypnosis

A hypnotic 'trance' can be brought about by giving a willing participant instructions to focus on the hypnotist's voice, to concentrate their attention, and to pay attention to their inner mental world (this is called a hypnotic induction). Some hypnotic inductions include suggestions for relaxation, but this is not strictly necessary. Researchers debate whether a hypnotic trance is an altered state of consciousness, that is, whether an individual's consciousness is altered by becoming hypnotised (see the state/non-state section for more information on this). We might say someone is in hypnosis if they have:

Many hypnotists liken the hypnotic 'state' to everyday experiences which people enter spontaneously, such as:

Suggestions can be given for alterations in the contents of consciousness, and can target perception, sensation, cognition, emotion, or behaviour. It is widely acknowledged that many of the interesting effects associated with hypnosis are actually brought about by suggestion (e.g. see Kihlstrom, 2008). Suggestions differ from everyday kinds of instructions in that a 'successful' response is experienced by the subject as having a quality of involuntariness, effortlessness, or 'realness': suggested behaviours often feel involuntary, and other changes feel effortless and 'real'. One widely held belief is that being in a 'hypnotic state' facilitates responsiveness to suggestion, and there is some evidence to support this. However, people can also respond to suggestions without being taken through a hypnotic procedure first - in the absence of hypnosis people are said to be responding to imaginative suggestions.

Suggestions are often accompanied by appropriate imagery but the following effects can be produced by direct suggestion without imagery:

My definition of hypnosis and suggestion

In motivated participants, hypnosis and response to suggestion is the relinquishing of some aspects of normal functioning by the executive control system. This allows for an an action to be initiated, but for the system to 'forget' that it initiated the action - in which case the action is experienced as involuntary. Or, it allows a scenario to be imagined, but for the executive control system to become unaware that it initiated the imagination, and for the resulting scenario to be experienced 'as real'.