States of consciousness: The state - nonstate debate in hypnosis

One important factor to note when considering non-state theories is that they do not imply that subjects are always 'faking', or not truly experiencing a hypnotic response. Although non-state explanations use terms such as 'role enactment' or 'self-presentation' they are still entirely consistent with the notion that hypnotised participants have unusual experiences. One of the most eloquent defences of this position comes from Spanos 1:

"For instance, to describe a man as enacting the role of "concerned husband" does not imply that the man's displays of concern are necessarily feigned. By the same token, the socio-cognitive view does not hold that hypnotic subjects who report lessened pain following an analgesia suggestion must be experiencing higher levels of pain than they report, or that those who fail to report target items covered by an amnesia suggestion must be privately rehearsing the very items they fail to divulge. On the contrary, the socio-cognitive perspective attempts to account for how, and under what circumstances, hypnotic subjects come to convince themselves as well as others that they are unable to remember, unable to bend their arms, and the like."

What is an altered state of consciousness?

"a sense of timelessness, denial of self, little if any self-reflection and analysis, little emotional content, little abstract thinking, no planning, and a sensation of unity".

One difficulty concerns how to assess a some of these concepts. Any aspect of brain function that we can measure changes continuously, a difficulty comes with deciding how much a measure would have to change from baseline to be considered 'altered'. And if consciousness is made up of multiple components, how many would have to be altered to constitute an overall alteration?

Behavioural studies comparing the behaviour of hypnotised and unhypnotised subjects responding to suggestions have been the mainstay of 20th century research into 'state' effects. The logic goes that hypnotised participants will respond differently on psychological tests due to being in a 'state' of hypnosis. A number of interesting methodologies including the real-simulator design, have been developed to control for potential biases. Interestingly it has been found that there is often very little difference in terms of response to suggestion between hypnotised and unhypnotised subjects: participants respond almost as strongly to suggestion whether or not it is delivered in hypnosis. This has led some to conclude that the hypnotic 'state' is an irrelevance, while others believe that any response to suggestion falls within the domain of hypnosis. Some recent studies are relevant to the state/non-state debate:

Neuroimaging studies, which began with electroencephalography (EEG) and which have developed to positron emission tomography (PET) and functional magnetic resonance imaging (fMRI) methodologies, offer promise in discovering more about how response to suggestion is mediated by the brain. At least two clear methodological approaches have been used to tackle the issue. The first examines brain activity in individuals as they become hypnotised - this approach characterises the earler EEG studies. A later approach examines brain activity in response to tasks conducted in and outside hypnosis, the aim is to assess whether responses to suggestions are processed differently when in hypnosis - later ERP, PET and fMRI studies have tended to take this approach.

Much interest has been paid to the relationship between hypnosis and other altered states of consciousness, and some research has been directed at identifying common underlying patterns of brain activity.

Meditation and hypnosis share some phenomenological characteristics: both are states of focussed attention; and both can be used to produce a deep sense of relaxation. However, there are important differences too: in meditation there is often a focus on one stimulus (e.g. the breath, a candle, a mantra) with the intention of clearing the mind, and there is often a spiritual element to meditation that is absent with hypnosis; hypnosis often has a more specific purpose and may be more concerned with directing participants to focus on (and generate) selected imagery, feelings, or other sensations.

Halsband et al 1 used EEG to compare the brain activity of a participant undergoing hypnosis or practicing Tibetan Buddhist meditation. They do not indicate what the participant was doing in hypnosis or meditation (potentially experiencing relaxation and allowing the mind to wander, hopefully similar instructions in both conditions). In hypnosis increases were observed i the alpha power band in the central and temporal locations. In the meditation condition alpha increase was observed in the frontal cortex. Increased activity in the theta power band was observed in hypnosis but not in meditation. 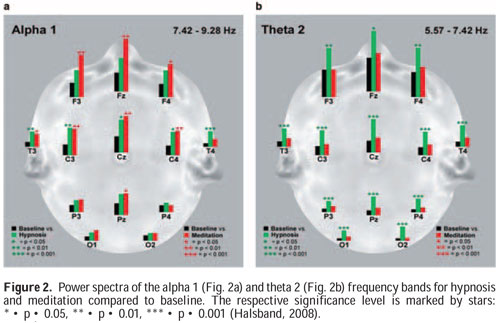