A key question in hypnosis research is whether or not suggestibility is modifiable: can 'lows' become 'highs'? On the one hand there is evidence that hypnotic suggestibility is a stable personality trait - individuals have been shown to score similarly over periods of up to 25 years (Hilgard, 1965; Piccione, 1989). This is backed up by data showing that the similarity of hypnotizability of identical twins is higher than the similarity of hypnotizability of non-identical twins (Morgan, 1973) (So called 'twin data' like this is often used by scientists to determine whether there is a genetic component to whatever trait they are measuring).

Mofication of suggestibility with hypnosis

So, suggestibility can be measured in the absence of a hypnotic induction. In the past this has been known as 'primary suggestibility', or 'non-hypnotic suggestibility', and a more recent label is 'imaginative suggestibility' because participants are often asked to imagine the suggested state of affairs (Kirsch & Braffman, 2001).

Since suggestibility can be measured before and after a hypnotic induction, one of the most obvious tests is to see whether a hypnotic induction increases suggestibility. Kirsch and Braffman (2001) report that this has been done in six studies and that the results are remarkably consistent, revealing that the effects of hypnosis are fairly small - in the region of 1 to 2 points on a standard 12-point scale (approximately 10-20%). Kirsch and Braffman (2001) term this difference between hypnotic and non-hypnotic suggestibility as 'hypnotizability', and note that the correlation between an individual's scores is very high, so an individual who has high imaginative suggestibility is likely to have high hypnotic suggestibility.

Modification of suggestibility via other psychological approaches

Many researchers have investigated using other psychological techniques to increase suggestibility. One of the most famous of these methods is the cognitive-behaviourally oriented Carleton Skills Training Programme (CTSP: Gorassini & Spanos, 1986). The CTSP is a 75 minute procedure which is designed to increase motivation and to teach direct management strategies (insisting that the participant make suggested responses and not just wait for them to happen, and instructions to become more absorbed). The CTSP has been studied in at least ten different laboratories and it is reported that it is common for at least 50% of participants who initially score low prior to training to score high afterwards. Some researchers have argued that increases brought about through this method are not genuine and are simply the result of participants being encouraged to respond without really experiencing their response as involuntary (a criteria Weitzenhoffer set as a 'true' response to suggestion). However, others have countered this by arguing that the subjective responses of such 'trained high suggestible' participants are indistinguishable from participants who were 'naturally high suggestible' without training. They also argue that training generalizes to new, unpractised, suggestions, and that the effects persist for at least 4-months (Gorassini, 2004).

Modification of suggestibility via manipulations in expectancy is another important area of research. People taking part in hypnosis or suggestibility tests have certain expectations about the likely outcomes of the procedures and these can affect their performance, e.g. people who don't expect to be hypnotisable don't tend to do as well. Experimental manipulation of these expectancies has been shown to change outcome. For instance, in a study by Wickless & Kirsch (1989) participants were given suggestions that they would experience changes in colours and sounds. Unbeknownst to the participants, the experimenters were using a series of coloured light bulbs and a tape recorder to subtly alter the balance of colour and sound in the room - giving the participants a strong experience that they were responding successfully to the suggestions. The investigators theorised that this manipulation would boost the expectancies of the participants - that they would expect suggestions to 'work' more than they had previously. To test the effect of these manipulated expectancies the investigators then tested the participants on a suggestibility scale. The results are presented in the figure below. They found that a verbal expectancy manipulation (feedback from a 'personality questionnaire' which falsely assured participants that they would be above average in their hypnotic abilities) was not effective in increasing hypnotizability, but that the experiential expectancy manipulation was successful in increasing hypnotizability. Participants were then debriefed and retested, and it was found that the suggestibility enhancement remained even after the deception had ended. This result was corroborated in a follow-up study (Kirsch et al, 1999). 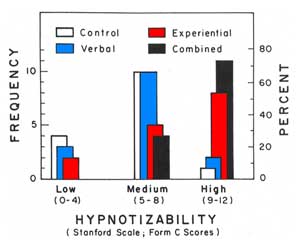 Another interesting approach to suggestibility modification has been research into the label 'hypnosis'. Gandhi & Oakley (2005) administered a set of eight standard test suggestions before and after the administration of a hypnotic induction. The twist was that half of the participants were told that the induction was hypnotic, whereas of the other half all mention of hypnosis was removed and replaced with the word 'relaxation'. They found that the 'relaxation' induction produced a modest increase in suggestibility, but that the increase in suggestibility was very significant if labelled hypnosis. These data indicate that an individual's perceptions and expectations regarding a hypnotic procedure can have dramatic effects upon their the procedure's effectiveness.

Modification of suggestibility with drugs

A number of researchers have tried administering drugs to increase suggestibility. Typically the methodology of these studies involves either testing the suggestibility of two groups of participants while administering one group the drug and the other group a placebo (Large numbers of participants are necessary in this design to avoid chance variations in suggestibility affecting the results). An alternative method is to test the same person twice, once before and once after taking the drug (In many ways this is a more reliable method, although it may introduce biases because of test-retest effects - participants becoming familiar with the tests). The results of the most reliable drug-hypnosis studies are presented below.

Many of the drugs tested have widely varying pharmacological effects and it is not yet known whether suggestibility increases are due to a specific neurochemical effect, or whether general dissociative ('woozy') effects of the drugs lead to suggestibility change, possibly via a psychological mechanism. We need to know more about the neurobiology of response to suggestion (see the section on neuroimaging studies) to answer this question more fully.

The future of suggestibility modification

The results presented above indicate that it is possible to increase responses to suggestions, potentially to quite a substantial degree. Given that some clinical uses of hypnosis and suggestion, such as pain relief, are known to vary in their effectiveness depending upon how susceptible patients are it could be enormously valuable to be able to modify suggestibility. Some pioneering research has already indicated that hypnosis can be beneficial alongside conscious sedation (Faymonville et al, 1997).