Reduction or removal of pain (analgesia) is one of the most dramatic effects of hypnosis and suggestion. This page contains information about research conducted to find out how hypnotic analgesia works. For more information about how effective hypnosis is for treating pain see the clinical pain section.

Hypnotic analgesia is dependent upon suggestion

Hypnotic analgesia is not dependent upon endorphins

Hypnotic analgesia is not dependent upon relaxation

Since many hypnotic inductions contain elements of relaxation it has been proposed that any pain relieving properties of hypnotic suggestion could be due primarily to a relaxation response. However, this hypothesis has been tested experimentally. Miller and colleagues (1991) gave analgesia suggestions to two groups of participants: the first group were hypnotised using a traditional relxation induction, the second group were hypnotised using an active-alert induction whist riding a stationary exercise bicycle. They found that the amount of pain relief experienced by each group was equivalent, contradicting the idea that hypnotic analgesia is simply the result of relaxation.

Hypnotic analgesia does not seem to be dependent upon imagery

What hypnosis can tell us about pain itself

As well as telling us more about hypnosis and suggestion a number of studies have had a feed-back effect and told us more about the nature of the pain system in humans.

In 1997 Rainville and colleagues published a landmark study which investigated the neural correlates of pain in humans. Using positron emission tomography (PET) they measured brain activity in a group of highly hypnotisable subjects while they had their hand immersed in either neutral (35ºc) or painfully hot (47ºc) water. Hypnotic suggestions were given for participants to experience increased and decreased pain unpleasantness and verbal pain reports were taken.

The figure below shows the area of the anterior cingulate cortex found by Rainville to have activity which correlated with the reported unpleasantness of the pain. Interestingly, as early as 1962 this area of the brain had been thought to be involved in the perception of pain unpleasantness. 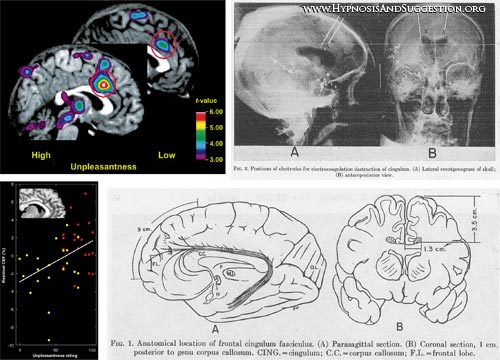 Figure: Colour images show the area of anterior cingulate cortex (ACC) whose activity correlated with perceived unpleasantness in Rainville et al (1997). Black and White images from Folz & White (1962) showing probe positioning to produce lesions in the same region of the ACC which produced reductions in perception of pain unpleasantness.

In a study investigating functional pain (pain without an obvious physical cause) Derbyshire and colleagues (2004) published a study investigating brain activity in highly hypnotisable participants while they experienced physically-induced (PI), hypnotically-induced (HI), or imagined pain. Participants were pre-selected for their ability to hallucinate a sensation of pain. In both the PI and HI pain conditions participants were led to expect that an electrical heat probe attached to their hand would heat up to become painfully hot. However, painful heat was only delievered in the PI condition. In the HI condition the probe was not switched on, but participants reported feeling varying strengths of pain.

In both the PI and HI conditions signficant activations were reported in key areas of the pain network, including the thalamus, insula, anterior cingulate cortex, and prefrontal cortex. Additionally, activation was observed in the HI condition in the primary somatosensory cortex. Imagination of pain only resulted in minimal acitvation of the pain network. These results indicate that it is possible to experience pain in the absence of direct stimulation, and provide some evidence for direct cortical involvement in some clinical functional pain disorders. Similar results were reported in 2005 by Raij and colleagues. 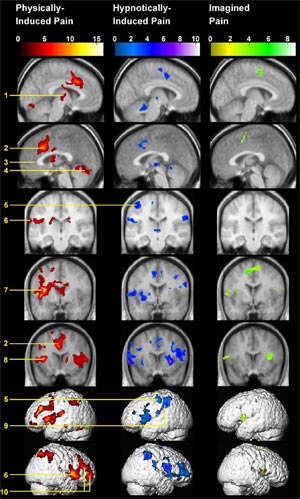