The neuroscience of hypnosis: Neuroimaging (brain scanning) studies of hypnosis 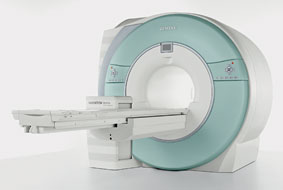 Brain imaging studies of hypnosis are particularly valuable as they can sidestep the 'demand characteristics' problem common to much hypnosis research. In the past researchers have had to rely on subjective report to confirm the effectiveness of a suggestion, but with neuroimaging technology we can look to see directly how a suggestion affects brain function. Like other hypnosis research, neuroimaging studies can be divided according to whether they are 'instrumental' and 'intrinsic'(Reyher, 1962; Barnier, 2003;Oakley, 2006). Instrumental studies use hypnosis or suggestion as a research tool to investigate specific phenomenon, whereas intrinsic studies focus more on what is special about hypnosis. (The distinction in the following table between intrinsic and instrumental studies sometimes isn't clear cut, but it's a useful heuristic).

Different designs of neuroimaging studies can have dramatic effects upon the how results are interpreted. When conducting brain imaging studies of hypnosis there are three main approaches which are outline here.

The advantages of this method are that it is logically simple and relatively easy to conduct. However, it is not clear that the two conditions are evenly balanced. The experimental control is weak because what participants are thinking about in each condition is not controlled or measured: it is possible that rather than measuring hypnosis this experimental design is measuring differences in other uncontrolled variables.

McGeown et al (2009) scanned the brains of high and low suggestible participants while they rested in an fMRI scanner, in waking and hypnosis conditions. The high hypnotisable participants showed a significant decrease in activity in the left medial frontal gyrus when hypnotised. This area is a region of the 'default mode network', a group of brain regions which are active during resting conditions. 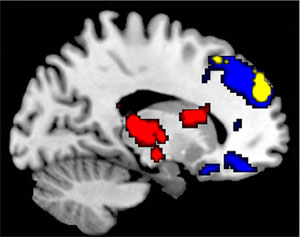 Control via manipulation of suggestion

The next type of study adds another layer of experimental control. Instead of simply resting while their brain activity is measured, participants perform a task: in this case they are given a suggestion.

This design controls for the 'contents of consciousness' to some extent. Each participant's performance of the suggestion (i.e. how strongly they experienced the effects) can also be measured, so variance associated with performance can be removed.

Control via manipulation of task

This type of study compares brain activity in hypnosis and waking states, with participants performing the same task in each condition.

Like the previous design, this task also controls for the 'contents of consciousness'.

Egner, Jamieson & Gruzelier (2005) used this type of design. They measured brain activity in high and low hypnotisable participants while they performed the Stroop task. Performing the Stroop task requires participants to inhibit automatic responses, and this task is normally associated with a region of the brain called the anterior cingulate cortex: this region is said to be involved in 'conflict monitoring'. Egner et al (2005) found that in low hypnotisables, activity in this region decreased when participants were hypnotised. In high hypnotisables activity in this region increased when they were hypnotised. They interpret these results as indicating different executive control processes in high and low hypnotisable participants, and argue that executive function is impaired in high hypnotisables following hypnosis. Further, they argue that these results do not support the idea of hypnosis being a state of highly focussed attention.