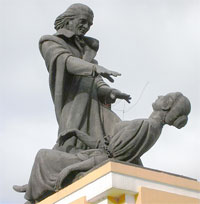 Abbe Faria was a Portugese monk, born in Goa. He was a contemporary to Mesmer, but he departed from Mesmer's theory of magnetic fluid. He understood hypnosis, or 'lucid sleep', to be a phenomenon involving suggestion:

"Suggestion, which is an order from a concentrator, is the immediate cause that triggers the real and precise cause that produces a particular and natural effect, but cannot produce it on its own. Induced lucid sleep, is a concentration of the senses produced at will and limited only by internal freedom, but caused by the external influence of the concentrator's suggestion."

He even seems to draw a distinction between hypnotic and imaginative suggestions:

"All effects of suggestions occur in subjects not only during lucid sleep, but also in the wakeful state so long as they have experienced concentration at least once. Some, however, exhibit these aptitudes without ever having experienced, or even being able to experience, this type of sleep. Nonetheless, this occurrence outside of sleep is only partly like what occurred during sleep, whether it concerns intuition or the influence on body movements."

I've just come across a wonderful website designed by Dom Martin which contains a wealth of information about Abbe Faria.