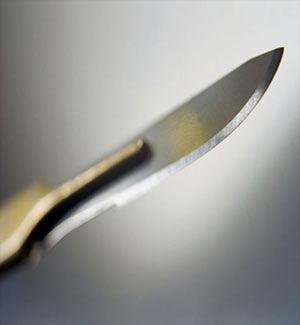 Hypnosis has a long history of involvement with surgery. At around the time the first anaesthetics were being discovered hypnosis was beginning to be used by a number of surgeons to perform supposedly pain-free operations: in the early nineteenth century James Braid, John Elliotson and James Esdaile were all reported to have successfully used hypnosis on surgical patients (Völgyesi, 1966). With the development of ether and other anaesthestics which worked reliably with large numbers of patients hypnosis was sidelined. Recently however there has been a resurgence of interest in using hypnosis alongside modern anaesthetics. Hypnosis is very effective when used adjunctively with conscious sedation techniques (where the patient is not made unconscious but is only lightly sedated), or it can be used prior to a general anaesthetic to reduce anxiety and promote wellbeing. A number of high quality studies have looked at the use of hypnosis in surgery, and they will be examined in more detail here.

Kekecs, Nagy, Varga (2014). The Effectiveness of Suggestive Techniques in Reducing Postoperative Side Effects: A Meta-Analysis of Randomized Controlled Trials

This meta-analysis (study of studies) examined research into the use of hypnosis to improve patient's experiences of surgery. They examined data from 26 studies to test the hypotheses that: (1) suggestive interventions are useful for reducing postoperative side effects; (2) therapeutic suggestions are comparable in effectiveness to hypnosis; (3) live presentation is more effective than recordings; and (4) suggestive interventions would be equally effective used in minor and major surgeries. They concluded that:

Suggestive techniques might be useful tools to alleviate postoperative anxiety and pain; however, strength of the evidence is weak because of possible bias in the reviewed articles. The lack of access to within-subjects data and the overlap between moderator conditions also limit the scope of the analysis. More methodologically correct studies are required with sensitivity to moderating factors and to within-subjects changes. For clinical purposes, we advise the use of hypnosis with live presentation to reduce postoperative anxiety and pain, until convincing evidence is uncovered for the effectiveness of therapeutic suggestions and recorded presentation. Pain management with adjunct suggestive interventions is mostly encouraged in minor rather than major surgeries.

Lang and colleagues conducted a randomised controlled trial on 241 patients undergoing invasive surgery to the arteries, veins, or kidneys. Three test treatments were compared: self-hypnotic relaxation, attention control, and standard care. Approximately 80 patients were randomised to each of these groups, matched for disease severity. The surgery was conducted under conscious sedation - patients were given Midazolam which leaves them awake but sedated. The standard treatment group consisted of treatment as usual. The attention control condition included an additional member of the surgical team paying special attention to the patients needs, providing the feeling of control and swift response to the patients requests. The hypnotic condition involved an additional member of the surgical team acting as in the attnetional control condition, but additionally administering a rapid hypnotic induction, giving suggestions for a sensation of floating, and encouraging the patient to use self-generated imagery. Pain, anxiety and drug use were assessed. In particular, after the surgery patients had access to a 'patient controlled analgesia' device which delivered pain medication at the touch of a button - the amounts requested an delivered were recorded.

Montgomery and colleages conducted a randomized controlled trial in a group of 200 women undergoing breast surgery (biopsy or lumpectomy). Patients were randomly assigned to a hypnosis group, or an empathic listening group. The hypnosis group received a 15 minute psychologist-conducted hypnosis session in the hour before the surgery (suggestions were given for relaxation, peace, and reduced pain, nausea and fatigue), and the empathic listening group received a 15 minute nondirected listening session with a psychologist before the surgery (patients led the discussion and the psychologist provided supportive/empathic comments). 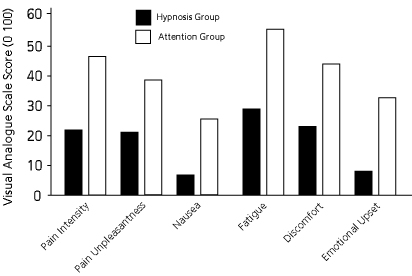