One of the interesting debates in hypnosis research is whether it constitutes an altered state of consciousness. Some people argue that of course it is - how else would powerful phenomenon like hallucinations, pain relief, or amnesia come about? Other people point to the importance of people's beliefs about hypnosis in determining their experience - they argue that it is as though hypnotised individuals are playing a role in an interpersonal interaction. So how do we resolve the debate? Well, one way would be to come up with a a way of measuring conscious states, and then to see whether this measurement changes when people are hypnotised.

Dr Ron J. Pekala, a researcher and clinical psychologist, has developed one useful measure - the Phenomenology of Consciousness Inventory - which is accessible on his website Quantifying Consciousness. Participants rate their subjective experience on 53 items, such as 'my state of awareness was not unusual or different from what it normally seems'. The results from the PCI can be visualised using psygrams (example below), which illustrate the correlations between variables of the consciousness inventory. 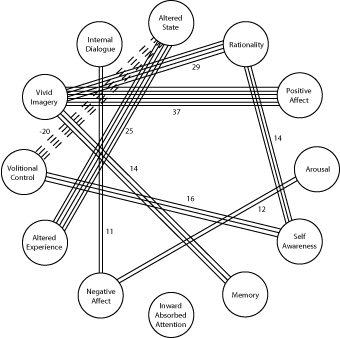 Importantly, scores on the PCI can be compared before and after the induction of hypnosis, before and after relaxation, or can be used to compare individuals of high and low hypnotic susceptibility. Tools such as the PCI hold real promise in breaking the deadlock in the altered state debate by allowing empirical testing of conscious states. Quantifying Consciousness is well worth a read.