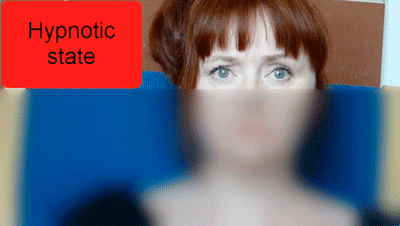 An study has just been published in the high-profile open-access journal PLOS1 purporting to show evidence for a hypnotic state. In it, Sakari Kallio and his colleagues present eye-gaze evidence from a single highly hypnotisable individual which they claim supports the idea of there being a measurable and identifiable hypnotic state.

The participant in the study, TS-H, is what is called a 'virtuoso' or 'somnambule'. Such individuals form a small sub-set of high hypnotisables, and are capable of experiencing powerful hallucinatory experiences under hypnosis. The participant in the study was able to enter and leave a hypnotic state very rapidly upon being given a post-hypnotic cue.

The researchers were interested in a particular phenomenon of hypnosis, the 'hypnotically induced stare'. This has been described previously by other researchers and is characterised by a glazed look in the eyes and a reduced blink rate. They took advantage of fairly recent advantages in eye tracking technology. They used eye tracking to measure automatic eye movements in and out of hypnosis, and compared the movements from their virtuoso participant to eye movements in a control group.

They found that in hypnosis TS-H's blink rate reduced significantly, and that saccades (involuntary eye movements) were also suppressed. These changes were not imitated by participants in a control group, despite instructions to mimic the effects of hypnosis. Kallio's team argue that their results indicate the presence of a measurable hypnotic state - that the state can be 'turned on and off', that it can be confirmed through objective measurements, and that it doesn't seem to be copy-able by control participants.

One weakness of the study is that it only looks at one participant - it might be that this individual just has special abilities to control their eye movements, and has nothing to do with hypnosis. But the researchers provide quite compelling evidence that this is not the case. If it can be replicated it could well provide a good objective marker of hypnosis. One question itposes though, is what does the measure mean for the distribution of hypnotisability? High hypnotisables only form approximately 10% of the population, and virtuoso's are a subset of highs - can only a fraction of 10% of the population be measurably hypnotised, or are there objective continuum measures of hypnotisability?

Read the full article at PLOS1.